Below is the early working version of an invited “Stakeholder Essay” in a collection of studies that summarize the affects of the Exxon Valdez oil spill on Prince William Sound’s communities and resources.  Several years in the making, the collection was recently published as a 355-page hardcover book, Sustaining Wildlands: Integrating Science and Community in Prince William Sound, Aaron Poe and Randy Gimblett (Eds.).  2017, The University of Arizona Press

Is it possible to love a place so much that what you do there imperils the very values that brought you there in the first place? What if there are so many like-minded people using the same place, that together you do just that, even if unawares?  These are questions I pondered for many years, as a working biologist, as a parent exploring the Sound by inflatable in the 1980s with my three young sons, and most recently, as a nature tour guide in Prince William Sound.

I was operating a Whittier water taxi and sightseeing business on the morning of March 24, 1989 when I was jolted by the morning news that shocked and angered Alaskans and people from around the world. That infamous event, the Exxon Valdez oil spill, soon became known by the acronym “EVOS.”  By the end of the 1990 season the business was struggling, and when my fifth charter season ended the next year it was clear that the business was failing for lack of a boat bigger than the four-passenger dory I was using.

Some temporary EVOS-related jobs opened up in succession soon afterwards. The Whittier Oil Spill Response Office hired me for October 1991 to help with beach surveys looking for oil lingering from the spill, and later that winter, the Forest Service needed a Wildlife Planner on an interdisciplinary team that was to rewrite the outdated management plan for Prince William Sound.  That yearlong Forest Service project was followed the next two years by jobs with my old employer, the US Fish & Wildlife Service, on more EVOS projects that greatly expanded my knowledge of the Sound’s wildlife.

I returned to chartering in summer 1995 with the old twenty-one-footer and a new appreciation for the Sound and its wildlife that I could share with my charter clients.  I had also built up enough of a nest egg to have a bigger, six-passenger boat built that fall. With more publicity from guidebooks and a website, the company grew. By 2003, I was focusing the business more on nature tours than on hauling kayakers. I was well into my sixties then, and a slower pace of running just one tour a day allowed me to spend more time to “smell the roses” right along with my sightseeing clients. It was rewarding just being able to spend more time watching and photographing the Sound’s wildlife.

The adjacent chapter considers the odds that increasing numbers of people using the Sound will adversely affect marine wildlife, and it offers suggestions for managers to better understand if impacts are actually happening. It examines how patterns of human use in the Sound overlap with the distribution of known wildlife that was harmed by the spill.

A couple of key examples include harbor seals and pigeon guillemots. Harbor seals are charismatic, watchable wildlife, often seen from boats of all types when the seals are hauled out on isolated islands and rocky headlands or icebergs;  areas visited infrequently by people on land due to their inaccessibility. Harbor seals have been officially declared recovered by the EVOS Trustee Council.

Pigeon guillemots (puffin cousins), on the other hand, are little-noticed by most visitors to the Sound. Regardless, they are a resource that was damaged by the Exxon Valdez oil spill and have officially remained in a “Not Recovering” status ever since. Their conservation situation is complicated by the fact that their population in the Sound was already declining when the spill hit. All these years after the spill, how can managers realistically balance the possibilities of an ongoing “natural” population decline, possible lingering effects of the spill, and possible harmful effects of boaters? 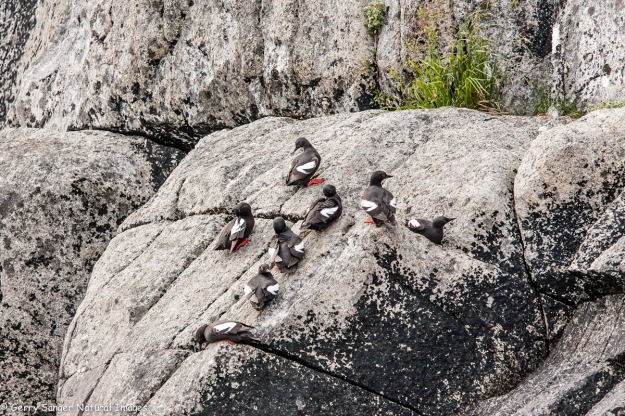 This can be a problem for wildlife studies where a large-scale synthesis overlooks possible specific problems at individual locations. An example is the large seabird colony in Passage Canal near Whittier, where thousands of black-legged kittiwakes, as well as several glaucous-winged gulls and pigeon guillemots also nest. This colony is visited daily in summer by hundreds of tourists in boats, large and small. Boats routinely approach this colony as close as 30–40 meters, and often as close as, literally, just a few meters. As the Principal Investigator of the most recent guillemot survey of the Sound in 1993, and from watching guillemots during my nature tours for many years since, I believe a distance of 40–50 meters to be a realistic minimum approach distance to guillemot colonies without the birds flushing or otherwise visibly changing their behavior. In any case, it is likely that all of the birds at this regularly visited colony have become habituated to the repeated close presence of boats to at least some degree, but it is unknown whether or not that has affected their productivity.

For harbor seals on the other hand, 100 yards is often advised by marine wildlife guidelines in the United States as a safe minimum approach distance by boats for marine mammals. In my view, harbor seals in the Sound need a much wider berth. Even at a distance of 200 meters, they will sometimes scramble into the water at the approach of a boat. That violates the technical definition of disturbing their “sheltering,” as defined by the Marine Mammal Protection Act of 1972.

Some examples of management actions that make sense to me—including beefing up education efforts for boaters as encouraged by this report—have merit and can be accomplished easily. Sorting out and enforcing legal jurisdictions among management agencies, however, could be a real challenge. The Forest Service can also restrict human presence on land at sensitive areas like breeding colonies: for example, Jackpot Island, an important guillemot nesting colony in southern Prince William Sound. Creating regulations, and especially enforcing them for boats on the water, is not nearly as clear- cut, due to complex agency jurisdiction issues beyond the scope of this essay. Nonetheless, it is likely that most boaters would respect “advisory enforcement,” especially if requested by uniformed agency personnel.

Regardless of the difficulties outlined above, I believe this study helps draw attention to the impact that growing numbers of humans could have on wildlife in the Sound. Both managers and the public are being made more aware of potential problems, and at the very least now have a yardstick to help direct future efforts at managing interactions between people and wildlife in the Sound. Continued monitoring of human use and wildlife by the Sound’s management agencies should be encouraged. However, with the present political climate to reduce federal spending, an educated cadre of concerned boaters, outfitters, and guides will ultimately be the best means of assuring that the Sound will not be “loved to death.”

1 thought on “Can PWS Be Loved To Death?”

I'd love to hear your comments, criticisms, or any other input on my blogs. Please use the Contact comment form, or write to me directly:
gerrysanger01@gmail.com