Note: I first wrote this January 2, 2015, while camped in southeast Arizona in a camper van I had at the time.

Ten different cats have been a part of my bachelor household for different stretches of the past 36 years. As any cat owner knows, their pets are individuals and can be independent little cusses, some more than others. Then occasionally, one joins the family who seems to be maybe not so much independent as just slow. “Slow” is a kinder term than stupid. One of my current two cats, “Lighter,” as sweet as he is, is just such a cat. I adopted Lighter (an orange tabby) and his fraternal twin brother Darker, as kittens in 2008 while I lived in Whittier, Alaska. Darker died from a wasting liver disease summer 2014, but Lighter is still going strong, along with Boots, my old-girl black-and-white “tuxedo cat.”

The latest episode of Lighter’s slowness happened just last night. I wear hearing aids in both ears, and a couple years ago I had upgraded my aging aids to a good, but expensive model that has firm latex ear molds. Twice, most recently just a couple months ago, Lighter had gotten a hold of one or both aids when I had inadvertently left them unattended, and chewed on the ear molds, usually destroying them. Both times, I scolded Lighter sternly, holding his head firmly, and what was left of the aid and ear mold right under his nose. He always cowered and seemed to get what I was trying to teach him – chewing on my hearing aids is a big no-no. Each time, I also upgraded my own slowness to always put the aids in their latched case or otherwise hide them from the cats when they are out of my ears. 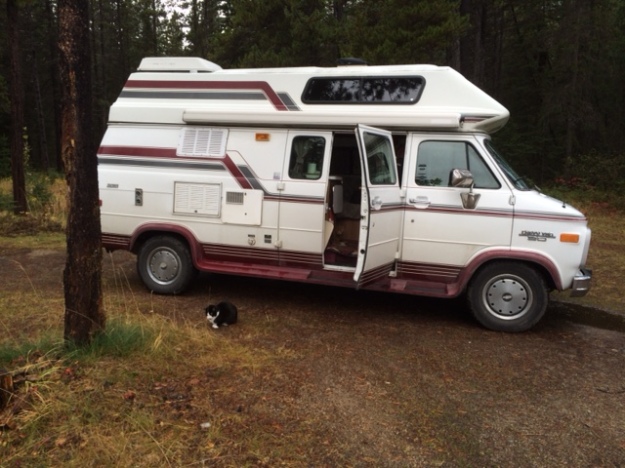 While I have been traveling and living in my camper van for the past four months, at bedtime I generally put the aids in their case, and then in the top drawer of a small portable chest of drawers that I keep beside the sofa-bed. The last time I showered was in the bathroom of the SKP RV park where I’m staying near Benson, Arizona, but when I returned to the van I neglected to take the aid case out of my pack and put it back in the drawer. That night, rather than getting up to look for the case, I just put the aids into the drawer, which has a catch that takes a bit of a tug to open.

That seemed to work just fine until the night of January 1st. Whether I had left the drawer slightly ajar, or whether Lighter was somehow able to open the drawer after I was asleep in spite of the catch, I don’t know. What I do know is that when I opened the drawer in the morning to retrieve the aids, they were both gone. Immediately fearing the worst, I looked on the floor, and there lay both aids, minus their ear molds. Lighter the slow learner, who just hasn’t gotten it with those expensive aids, had done it again. I totally lost my cool, and swatted him a good one on his rump with the back of my hand, cursing the whole time. Lighter immediately ran to the front of the van, to hide under the driver’s seat.

Then, while I was still cursing and contemplating throttling Lighter or throwing him out of the van into the Arizona grassland where I was camped, the Holy Spirit began speaking to me. Not in an audible voice, but as gentle, but persistent thoughts that went something like this:

“Gerry, don’t I always forgive YOU when you continue to “not get it” that you are missing the mark in some way? Haven’t you realized that there have been episodes in your own life when you had a sudden “AHA!” moment when it finally dawned on you that you have been messing up in some way for a long, long time? Haven’t you been pondering how some brothers and sisters in Christ seem to just not get it that something they continue to do or not do is so obviously not what God wants them to do or not do? Hasn’t my patience with you been ongoing and complete? As practice with being patient and forgiving with others, why not just forgive Lighter?”

I pondered that for a while, and then decided to do just that – just forgive Lighter, and move on. And I vowed to be even more careful putting my hearing aids in their case, and then into that drawer, making sure the drawer latched. A calm immediately replaced my anger, a confirmation that I finally was getting it.

And there is a somewhat happy ending. Strangely, I found the right side ear mold on the floor, intact except for a split along one side. There was no sign of the left side mold, so Lighter must have eaten it. Happily, the mold that Lighter did not eat was still in good enough condition to be used. I also had a spare mold, and hopefully, it would be for the left side. As it turned out, however, both molds were for my right ear, but the split in the one that Lighter had bitten actually allowed it to bend enough for a useable fit in my left ear until it could be replaced with a correct new one.

I'd love to hear your comments, criticisms, or any other input on my blogs. Please use the Contact comment form, or write to me directly:
gerrysanger01@gmail.com